Your cart
Great glutes and lovely legs can be built by focusing on just two lifts: the squat and the deadlift. Pro fitness model Ashley Hoffmann is here to show you how it's done!

Developing a strong and shapely lower body doesn't have to be complicated. In fact, for Neon athlete and fitness model Ashley Hoffmann, the most effective leg-sculpting and booty-building lifts are the two most basic: the squat and the deadlift.

Not only are the squat and deadlift excellent glute, hamstring, and quad builders, they're also among the best lifts for promoting total-body strength, balance, and athleticism. These two core exercises belong in your program regardless of your fitness goals or skill level.

If you've never attempted these lifts—or haven't tried them in years—follow Hoffmann's tips below. She's also provided her personal workouts for beginners and intermediate or advanced lifters so you can start implementing these lifts immediately!

TIP 1 SIT BACK TO SQUAT

Although squatting is a basic human movement, many people do it incorrectly. The most helpful cue to remember when you're squatting is to sit back. "Don't squat by bending your knees so they move over your toes," says Hoffmann. "Instead, move your hips back while you push your knees out." 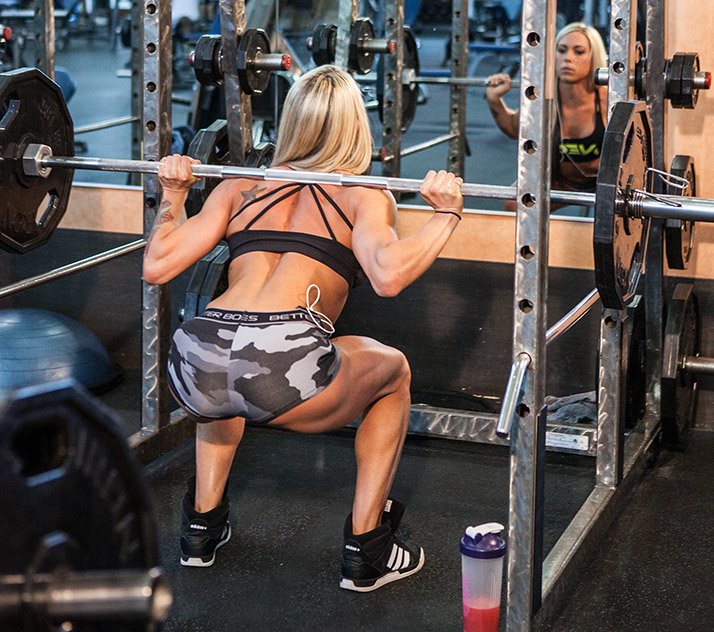 SQUATTING BY BENDING YOUR KNEES AND MOVING THEM FORWARD PUTS A LOT OF STRAIN ON YOUR KNEES AND MAKES THE MOVEMENT FAR LESS EFFECTIVE. SO, TRY TO SIT BACK LIKE YOU'RE SITTING IN A CHAIR.

Squatting by bending your knees and moving them forward puts a lot of strain on your knees and makes the movement far less effective. So, try to sit back like you're sitting in a chair. If you don't have the balance to accomplish the lift this way, start by practicing the movement without weight. Sit down to a bench by moving your hips back. When your butt touches the bench, stand back up. As you get more comfortable with the movement pattern, add some weight.

By making the movement hip instead of knee dominant, you'll get much greater glute and hamstring activation. Squatting this way will also help you train your entire posterior chain—hamstrings, glutes, lower back, adductors—to work as a system, strengthening your entire body.

"If you can't break parallel when you squat, it's most likely because your stance is too narrow," says Hoffmann. Opening your stance so your feet are beyond shoulder width will allow your hips to get past your femurs so you can get down farther.

It's also important to remember that while you're squatting, you should keep your knees tracking directly over your toes. If you find that your knees are caving inward as you move up or down, you need to stop what you're doing and start practicing the movement without weight. Bringing your knees in as you squat will only create pain and eventually cause an injury.

"Imagine spreading the floor with your feet," says Hoffmann, "That will help you push your knees out without having to think about it."

Another common problem with squatters is that they think the squat should look the same for each person. "Everyone has a different anatomy," says Hoffmann, "so your squat may look a lot different than the next person's."


"Learn a position that allows you to move through the range of motion as comfortably as possible," she adds. Tall people may have a more difficult time reaching depth than shorter people—and that's OK. Your body should move in the safest and most efficient way. What's right for you may not necessarily be right for others.


The same can be said about the deadlift. Some people find they're much more successful in the sumo position than the conventional position. To be good deadlifter or squatter, you need to learn what works best for you.

Because deadlifts and squats are so taxing and difficult, how you breathe will make a big difference in your performance. "Most people take a little breath of air before they start a lift," says Hoffmann, "but that's not the right strategy for big lifts."

When you're doing squats and deadlifts, it's helpful to use the Valsalva maneuver. To do it, take in a deep breath and push it into your abdomen. You should feel a lot of pressure. Keep that breath as you squat down, and then let it out when you've returned back to the starting position.

That added intra-abdominal pressure will actually help protect your back and better engage your core. Although the squat and the deadlift are primarily leg movements, your core plays a huge role in stabilizing your body and moving the weight.

As you get stronger and use more weight, Hoffmann also recommends investing in a high-quality weight belt. Belts give your abdominals something to press against, which increases that good intra-abdominal pressure and provides even better protection for your back.

A lot of people make the mistake of looking toward the ceiling when they squat or deadlift. Keeping your head in a neutral position is much healthier for your spine. Hoffmann says the easiest way to make sure your head is neutral is to focus on an area on the floor about 3-4 feet in front of you. This will help keep your neck in line with your back. 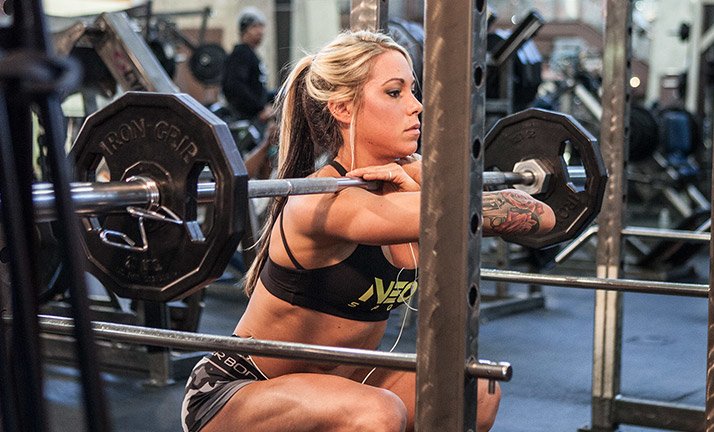 A LOT OF PEOPLE MAKE THE MISTAKE OF LOOKING TOWARD THE CEILING WHEN THEY SQUAT OR DEADLIFT. KEEPING YOUR HEAD IN A NEUTRAL POSITION IS MUCH HEALTHIER FOR YOUR SPINE.

Keeping your head neutral will also help keep your form on point. During both lifts, you should move your shoulders and hips up at the same time. If you find that your hips are coming up before your shoulders, you'll put yourself at risk for injury, especially when the load gets heavy.

When you're deadlifting, it's important to pull the slack out of the bar before you try to pull it up. "Don't just yank the bar," says Hoffmann. "Instead, engage your lats by pulling the bar toward you until you feel it press tightly up against the plates. Once you hit this point, then you can begin to pull the bar off the ground."

Engaging your lats and will help you generate more total power and help protect your back against injury.

Finally, Hoffmann recommends that you progress slowly to ensure you are able to maintain good form on both lifts. "Your weekly increments can be as little as 2.5 pounds," she says. "If you notice your knees caving in or your hips shooting up before your shoulders, then it's likely the weight is too heavy." 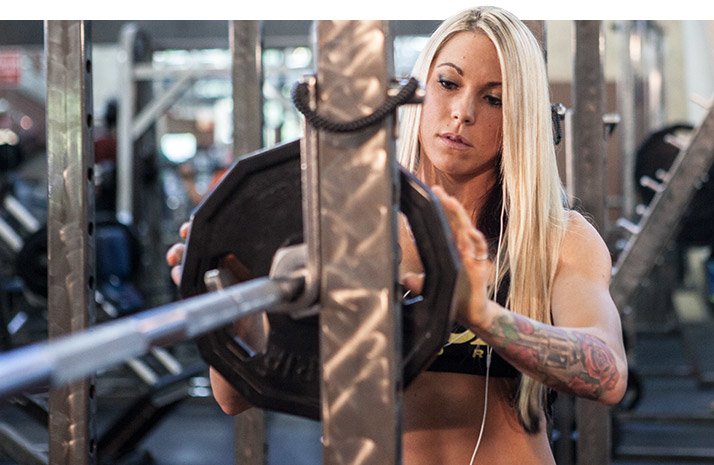 "YOUR WEEKLY INCREMENTS CAN BE AS LITTLE AS 2.5 POUNDS," (ASHLEY) SAYS. "IF YOU NOTICE YOUR KNEES CAVING IN OR YOUR HIPS SHOOTING UP BEFORE YOUR SHOULDERS, THEN IT'S LIKELY THE WEIGHT IS TOO HEAVY."

If you're new to the lifts, pay attention to your speed and form before anything else. Once you feel totally comfortable with each movement, you can add 5-10 more pounds per set.